Flying in paradise: a vacation flight lesson in Maui

One of my flight instructors once told me he would often bring along his flight gear while on vacation, in case he had the opportunity to fly. He recommended contacting a flight school and asking about taking a short lesson, since having an instructor in the plane with local knowledge would be invaluable. This was the first time I had decided to bring my logbook with me on vacation. I was a little apprehensive, but thought what an adventure it would be. I didn’t bring all my gear—just my certificate, medical, and logbook.

While on vacation in Hawaii, on the island of Maui, my wife suggested that I should rent a plane for a short flight. My wife has an aversion to small airplanes and was not interested in going for a flight. She said she would go flying with our nephew Ryan sometime, because he is a real pilot. I decided to try to take a lesson or a discovery flight with one of the local flight schools. I checked the weather for the next couple of days and everything looked pretty good. So I made a few calls and found Fly Maui at Kahului Airport had an opening for an hourlong lesson the next day. I was very excited to be able to fly in Hawaii as well as on an island for the first time. There were also a couple of helicopter schools that offered either a discovery flight or first lesson as well. 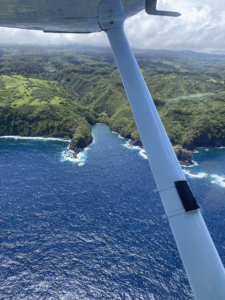 Not a bad view from the left seat.

With logbook in hand, I headed for Kahului Airport, which is a Class C airport. They sent me a pin drop to get to the hangar they use in the general aviation section of the airport. There was plenty of parking when I arrived and I was greeted at the walk-in gate by Jacqueline, my new instructor. Jacqueline led me over to her company’s hangar to fill out several forms prior to the flight. She gave me a short interview, sizing me up for the flight. I’m sure she was thinking she was going to have her work cut out for her with this old guy who just got his pilot’s license. I told her to just treat me like I was one of her students.

We walked out to the plane, a newly painted Cessna 172. I noticed the seatbelt on the left side was hanging out the door. We did the preflight inspection and continued with the checklist. After the engine start, I noticed the flap switch was like a Cessna 150 or 152 when I retracted the flaps. Jacqueline got us a clearance for a local flight and then taxi instructions.

As we taxied through the non-movement area, she advised we would hold short at taxiway echo and we would most likely cross the runway diagonally. When we reached echo, we were advised to hold short for landing traffic. We completed the run-up there because the tower will sometimes ask if about a mid-field takeoff. Ground then instructed to switch to tower frequency. Jacqueline contacted the tower and we were advised to back-taxi runway 2 and we were cleared for takeoff. Jacqueline said this was the first time she was ever instructed to back-taxi at this airport.

After takeoff, Jacqueline told me to level off at 1500 feet and turn right when we reached the coastline. She pointed out an abandoned building with a metal roof we would use as an aiming point when we returned to the airport. As we flew along the coast, I was given a great scenic flight. Jacqueline pointed out an area which was used during the filming of one of the Jurassic Park movies.

Jacqueline asked if I wanted to do a couple of touch and goes at the Hana Airport. I said “Sure, sounds great.” She said the runway is 3600 feet long and 100 feet wide. I thought to myself that’s cool, that’s plenty of runway for a Cessna 172. She then advised the traffic pattern is a little different due to an area near the airport we should not fly over. It really was not too bad, it seemed to just put us out a little wider than normal.

At this point the flap switch came into play. With no flap position indicator, it was more on feel as I added in the flaps. As we turned final, Jacqueline said the trees were going to look pretty high at the end of the runway but it’s more of an illusion than the actual height of the trees. The landing and takeoff went fine and we made one more lap around the pattern.

After departing the Hana Airport, we turned left to follow the coastline back. We were now flying at 1000 feet. This time I was on the side toward the island with great views. The skies were clear, with just a few high clouds and the wind was very mild. Jacqueline pointed out several celebrity homes along the way. The air was also super smooth, even at 1000 feet.

As we approached Kahului Airport, we used the abandoned building as an aiming point to come in at a 45-degree angle to the downwind. Even over land, the air remained smooth. Jacqueline called out a road to fly along parallel to the runway. On short final I realized I was about five knots fast and floated the landing a bit. While we taxied back Jacqueline said I did pretty good, even though I came in a little fast I was still able to make a nice landing.

After securing the plane making sure the seatbelt was inside, we walked back to the hangar for a debrief. She went over the flight with me just like I was one of her regular students and filled out my logbook. I was her last student for the day.

What a great adventure: flying in paradise in a nice plane with a great instructor.

Development Of An Active Flow Control X-Plane For DARPA Progresses

Picture of the Day: Busy Beavers